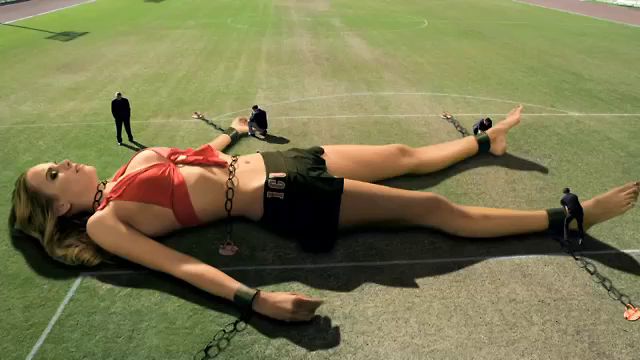 It’s amazing that in a movie that features a fifty foot cheerleader, the most far fetched and failed effect is the attempt to make Jena Sims look homely and ugly. That’s by no means a criticism, just an observation of a sorts. Sims is gorgeous, even with the wide spectacles they make her wear, and pasted on zits. She also often resembles Alicia Silverstone in certain lights. Roger Corman and director Kevin O’Neill assemble a pretty respectable cast for another iteration of “Attack of the 50 ft. Woman.” This time it’s a giant cheerleader who is gorgeous and mad as all hell.

Cassie is a geeky and brilliant scientist who spends her days trying to be accepted within the folds of the gorgeous cheerleading squad, all of whom happen to be running the local sorority. When not trying out for the squad, and hanging out with her pal Jett (the painfully sexy Sasha Jackson), she is working on a groundbreaking formula that grants her immense beauty and athletic ability. Soon enough she becomes the envy of most of her school mates, including the alpha bitch Brittany (equally sexy Olivia Alexander) who becomes infuriated when Cassie gains the upper hand based on her hidden charisma and enthusiasm that comes along with the injection of her secret serum. Unfortunately, it gives her terrible side effects like cramping and–oh, turning her in to a gigantic woman.

The fun behind “Attack of the 50ft Cheerleader” beyond the gratuitous nudity, is the rather strong cast Corman assembles here. Treat Williams, Ted Raimi, Ryan Merriman, Sean Young, and Mary Woronov all appear, while there are two very fun cameos by Roger Corman himself, and director John Landis. It’s a whose who of cult filmdom, and I enjoyed spotting the cameos. Things get worse for Cassie, as giant monsters begin appearing all over the college campus, wreaking havoc on the student body, while her transformation make her more and more gargantuan, as she takes hold of her independence and sexuality. There’s also Brittany who discovers how she became a giant, and Treat Williams’ greedy Dr. Grey who wants to catch Cassie and exploit her for money.

Williams really chews the scenery as the evil Dr. Grey who really doesn’t care about anything but money, and plays well off of Ted Raimi. Director Kevin O’Neill is able to stage the illusion of Cassie’s growth well, implementing force of perspective and clever camera angles, while using computer animation with welcome restraint. When she finally start becoming larger than an average person, O’Neill keeps the illusion well, and doesn’t mind having fun with Cassie’s massive size, either. You have to love the giant cat fight in the football field. “Attack of the 50ft Cheerleader” is about as silly as the other iterations of the sci-fi original, and just as fun. It’s definitely a gratuitous and campy eighties throwback for B movie fans.