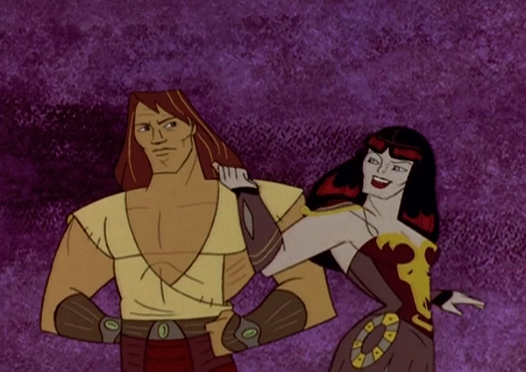 In the nineties, Hercules and Xena garnered humongous fan bases that were vocal and loud. And this was long before the internet became a common facet in every home in the world. Hercules begat Xena and Xena became the more popular of the pairing, with Hercules still showing up every so often to remind us that, yes, Kevin Sorbo was still on his journeys as the half god. Both series were so big they even prompted a ton of merchandise, including a prequel TV series aimed at kids starring a very young Ryan Gosling, and this animated action movie, which barely clocks in at eighty minutes. I’m not sure if this movie is even considered canon, but it is Hercules and Xena together again, fighting evil Titans and trying to stop the evil Goddess Hera.

I fondly recall seeing “The Battle for Mount Olympus” on VHS back in 1998 when the home movie arrived in one of those patented Disney bubble case. Which is kind of weird, considering the movie itself isn’t very well animated at all. When the movie is at its best, it feels like early Genndy Tartakovsky sans the charm. Most of the original cast reprise their roles in yet another crossover, as Hercules while on one of his legendary journeys, is shocked to see his father Zeus kidnap his mother. Anxious to keep her from harm, he and his friend Iolaus travel to Mount Olympus to reclaim her. Meanwhile Zeus falls under scrutiny by the Gods, including wife Hera, who is confused and angered by his kidnapping of her. Hera then steals Zeus’ Cronus stone, a mythical stone that has kept the titans underground for a very long time.

After wielding it, she unleashes the evil monsters, all of whom begin their siege on Olympus. Xena is pulled in to the fight when Artemis turns her friend Gabrielle in to a giant Eagle, prompting her to team up with Hercules, who inadvertently allowed the titans a window to take over Olympus. “The Battle for Mount Olympus” moves at a breakneck speed, with no real time to rest. Hercules is a foolish hero who makes a lot of mistakes, Iolaus puts up with him, and Xena is pushed in to this battle to save Olympus thanks to Hercules’ unwillingness to stop the Titans initially. The animation is occasionally solid, but a lot of the action scenes and big moments demanding a lot of effects are sub-par, at best. There are also two forgettable and inexplicable musical numbers from the evil Titans, and Xena. Granted, Lucy Lawless has a lovely voice, but the musical numbers feel tacked on for the sake of competing with Disney.

“The Battle for Mount Olympus” is a serviceable diversion at best, and has a lot of imagination packed in, as well as great voice work. Most of the voice cast return for this movie, including its four principle leads from both series. If anything, it should be a neat addition to the collection of Hercules and or Xena completists. It’s at least more entertaining than those “Action Pack” TV movies.