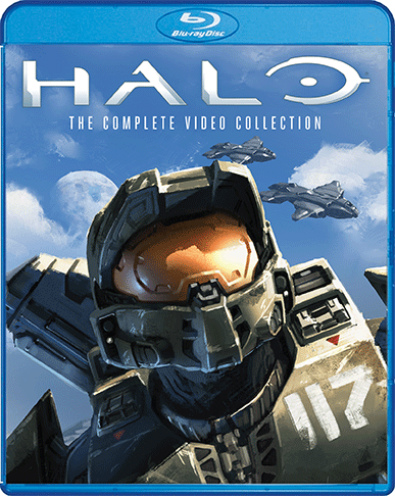 Shout! Factory once again comes forward with a nifty collection for fans of action, science fiction, and Halo, comprising four of the web series from the mid-aughts that chronicled the “Halo” game universe. With a tight package and a slew of great extras and bells and whistles for the fans, this video collection is strictly for the die hard Halo fanatics that want to see more of this world, and learn so much more about the Spartans and war that’s ensuing.

Halo Legends from 2010, is the first of the “Halo” animated saga that, like the other films, will mainly appeal to the game fans. It’s an anthology of seven short anime films set in the Halo universe. The series of shorts were created with notable anime houses like Toei Animation, and Shinji Aramaki of “Appleseed.” The animation is very much in the vein of the aforementioned films, and garners episodes that side step the main narrative in favor of much more interesting tales a la “Animatrix.” There are films like “The Package,” involving a group of Spartans set to recover a mysterious package from an alien ship. As well, there’s “Odd One Out,” involving a Spartan who becomes stranded on an alien planet. Halo 4: Forward Unto Dawn from 2012 is another mini-series/web series, told in five parts and initially garnered mixed reaction from fans. Some fans appreciated the new characters, while others found the whole line up of episodes lacking in momentum or excitement.

Set in 2525, we follow cadet Thomas Lasky, as he trains to become a soldier, but has his doubts about war, and going in to battle. While struggling with his convictions, the planet is invaded by an alien force, and Lasky has to realize his full potential and fight against the enemy before all is lost. Halo Nightfall from 2014 is yet another web series/miniseries released by Microsoft and Xbox360, and was one of the first Xbox Originals. With five episodes, “Nightfall” was means as an origin story for Agent Locke, a secondary character in “Halo 5.” The web series “Nightfall” was intended to connect “Halo 4” and “Guardians” as a unit under Locke’s command is deployed on a distant human outer colony, to investigate terrorist activity. With the discovery of a biological terrorist weapon that can affect only humans, Locke and his team work with the Sedran Colonial Guard and commander Randall Aiken to track down the weapon once and for all.

Soon the search turns in to a desperate fight for survival. With “Luke Cage” star Mike Colter, “Nightfall” contained connections to the TV series, and also garnered interactive features for “Halo” players. Viewers were also able to access information on the “Halo” encyclopedia for characters and locations. Finally, Halo: The Fall of Reach from 2015, is based on the original “Halo” novel, and is an animated web series/miniseries and tells the origin of the Spartans, their development as a military force, and their ultimate war against alien invasions. For fans that didn’t even like the series, this set might be of interest, as it strives to be a universe expanding set that opens up the world of “Halo” for customers.

Disc One has a slew of video based extras, and disc two garners four new commentary tracks. On Bonus Disc One there’s “Halo Nightfall: Launch Party Live Show” is an hour long presentation from Halofest 2014 with Blair Herter, Freddie Wong, and iJustine, along with Xbox spokesman Major Nelson. There’s a Halo Nightfall: Photo Gallery, and the one hour “Remaking the Legend: Halo 2 Anniversary” an in depth look at remastering the original X-box masterpiece for a new generation. It covers the technical details, the voice acting, new sound effects, and the lasting strong fan base for the game series. “Halo 4: A Hero Awakens” is a ten minute look at the evolution of Master Chief, and the human voices behind the iconic character.