I was an ardent supporter and fan of the “Paranormal Activity” films for a while there. Parts one to three are a pretty great trilogy on their own, discussing Katie’s family, and how their entire lives were fated to become prey to the demonic entity known simply as “Tobi.” With the release of “Paranormal Activity 7” being announced for a potential 2021 date, I’m hoping the new movie bothers to create some sense of cogency by bringing back characters, introducing heroes, and answering so many lingering questions they never bothered to answer.

What was Hunter’s importance? Was he supposed to be a vessel?
Hunter is made a big deal of in “Paranormal Activity 2” and we learn that in the third film Tobi wanted a male vessel, as Katie’s grandmother pressured her mom to have a son. So when we finally do get to Hunter, the question becomes what his point was. When Tobi is forced to take Katie as a vessel, she has some super powers including super strength, stealth, psychic powers, and more. So what could Hunter bring to Tobi’s ultimate end goal with his army of witches?

How did Hunter fall out of sight of the cult, and get adopted? And how did Katie finally track him down?
The biggest, most gaping plot hole in the painfully weak “Paranormal Activity 4” is that after the elaborate plot to take Hunter, which involved slaughtering her family, suddenly Hunter is now adopted, with a new name, and being stalked by aunt Katie. Even more so he’s being groomed by his next door neighbor for something that’s never really clarified. So how the heck did Hunter get out of Katie and the cult’s grasps? What happened during that period? How did Katie and the cult lose track of him for all of those years? 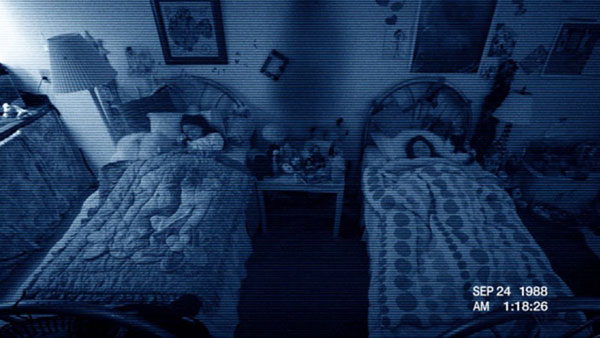 Why did Katie and Kristi’s grandmother allow them to live under the delusion that they were living virtually normal lives only for them to get gradually tortured by Tobi?
So Katie remembers being tortured by Tobi as a girl. She remembers stuff about their house going down in a mysterious blaze. But in parts two and three, it’s never explained or justified why their grandmother would murder their parents, and allow them to live their own lives, rather than simply stay in a controlled environment where they could groom them for Tobi. How did Katie forget Tobi took over her body? Why did he leave her body as an adult? Why didn’t Tobi hope for Katie to have a baby with Micah? Nothing’s ever explained.

If Tobi is Human in the climax of “Ghost Dimension,” why does it seem like he has hooves in the original film?
In the original “Paranormal Activity,” Katie drops powder all over her floor as a means of tracking down the demon. When they finally find the proof, the demon is obviously donning hooven feet. So what? Did Tobi evolve? Was he messing with them? If it’s the latter, then to what end? What was the point? Hell, even in the original and the third film, he even growls as responses to certain characters. So what the hell is he? Is he a demon turned man or a man turned demon?

If the Cult had the house under watch in “Ghost Dimension,” why did they let the parents use and keep the ghost detecting Camcorder?
If you’re going to keep a house under watch and seemingly possess their daughter with the help of Tobi, why overlook something like the ghost detecting camcorder, which gives the family at least a fighting chance? Who left the camcorder there for them? If it was Katie and Kristi’s step dad, then wouldn’t you back track to ensure he didn’t leave any trace of the big mission behind for anyone else?

What was the end game in “Ghost Dimension”? World domination? The coming of the anti-Christ?
A lot of “Ghost Dimension” purports to put the whole series to an end and never answers much of anything. Tobi is back, and he’s now an amorphous black blob that’s sentient and can easily control and or possess children. Beyond that, there’s never a big justification for what we’re seeing. There’s never that big moment where we collectively think “Ohhhh! That’s what this was all about!” Why was daughter Leila or even a male vessel all important when Tobi just needed to reform again?

What happened to Hunter’s sister Ali Rey? What happened to Demonologist Dr. Frederichs? What Happened to the Santeria Maid Martine? What happened to videographer Randy Rosen?
This series has lined up such a gallery of victims and stray characters, all of whom we never heard from again. What I’d love to see is some actual heroes stepping up to the plate to challenge Tobi, and provide a rivalry against his army of minority body guards and elderly witches. Tobi almost always confronts hapless families and seems terrified by anyone with experience in fighting monsters. Let’s run with that!

What were some questions you had that were never explored? Comment Below!