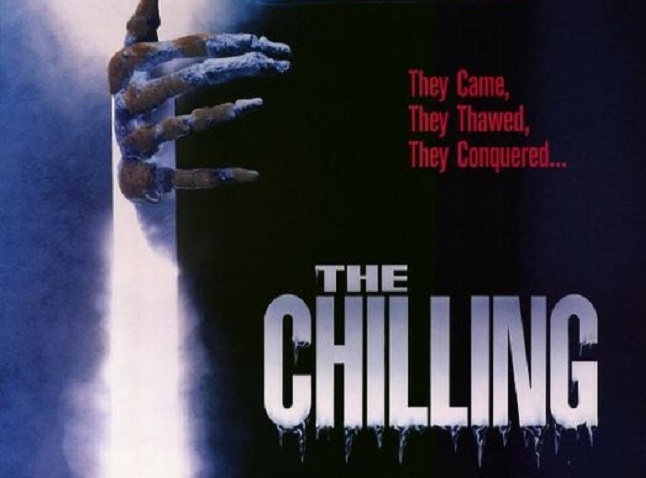 Do you like movies that look and feel like they were written during a weekend bender that might have included the sort of drugs that Rick James often used? Do you like movies that star actors whose fortunes have fallen so low that they’d have to rise up a few notches on the cinematic food chain in order to merely be considered “washed up”? Do you like movies made by people that seem to have seen a lot of movies but don’t seem to know how to make one themselves? Well, you’re in luck! Because today I’m reviewing THE CHILLING and it’s a Grade A quality turd.

END_OF_DOCUMENT_TOKEN_TO_BE_REPLACED

After the excellent release of the limited edition 2018 print, Code Red delivers a wider and more broadly available upgrade for the highly deserving “Savage Streets.” The 1984 cult classic is still a marvelous gem of eighties exploitation. It channels the classic Youths Gone Wild films of the fifties, and is filled with gorgeous women, roughneck teenagers, and an insanely sexy Linda Blair wreaking pure vengeance against the men that victimized her sister. She does it all with a bitchin’ crossbow, to boot.

END_OF_DOCUMENT_TOKEN_TO_BE_REPLACED

Director Tom De Simone’s “Hell Night” usually gets lumped in together with a lot of the other eighties slashers, but in reality his genre offering is so much more unique than a simple hack and slash. “Hell Night” is a great Halloween horror romp that feels like something pulled out of a haunted house Gothic novel. It’s the perfect fixture for the holiday delivering a relentlessly bleak tone that makes it quite an unnerving experience all the way through. Linda Blair can do these kinds of horror movies in her sleep and she plays final girl Marti quite well, doing her best to battle a deformed monster in its territory.

END_OF_DOCUMENT_TOKEN_TO_BE_REPLACED

“Home Alone” begat “3 Ninjas,” which begat cheap, kiddie, straight to video, action fare like “Double Blast.” Mixing the appeal of the adventure movie with kids fighting crime, both of which were oddly prevalent in the decade, “Double Blast” is the epitome of the poorly constructed cash ins that littered video stores. The movie is so bad that often times you can see the pair of heroes burst in to laughter as they engage in martial arts with the film’s comedic henchmen. Jimmy and Lisa are an adventurous brother and sister who love to get in to adventures involving ninjas and martial arts. When their dad, a professional kick boxer and widower named Greg goes out for the day to compete in a tournament, rather than take them along, the pair of kids ultimately gets in to big trouble back in town.

END_OF_DOCUMENT_TOKEN_TO_BE_REPLACED 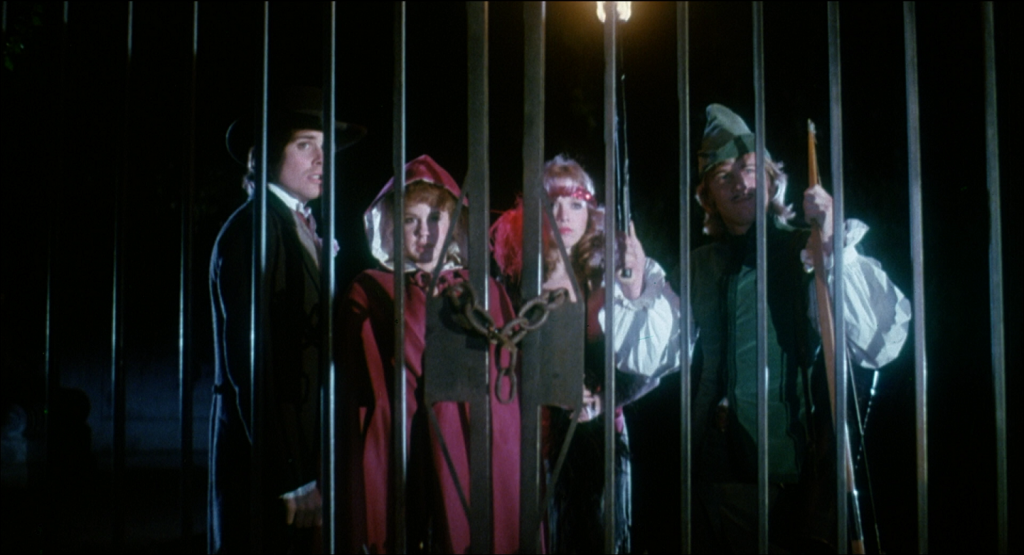 It’s Hell Night, the night before classes officially start, and Marti and her friends have been challenged by Alpha Sigma Rho to stay overnight at the dreaded Garth Mansion. The Mansion has a long history involving a deformed family, murder, and suicide, and the classmates are intent on making their night terrifying.  Taking the challenge, soon they begin to realize they’re being terrorized by the deformed owner of the manor, and are unknowingly locked in the mansion thanks to the steel gates. Now they have to escape and make their way back to town, or fight for survival and hope for a rescue.

It’s a damn shame that Linda Blair was nominated for a Razzie in 1981 for “Hell Night,” since her performance here isn’t bad. Hell, it’s quite good as she manages to once again hit that rare chord as a final girl who is also insanely hot. Too many times in the eighties did we have horror movies with whiny final girls who were in the avenue of a plain Jane, but Blair is very good as the simple college girl who runs around from a deformed freak in a dress that perfectly shows off her buxom body. Paired with her cherubic face, it’s a perfect formula for a character we can root for. Blair returns once again to the horror fold for “Hell Night,” a damn fun and very underrated Halloween horror movie. Chuck Russell’s film has taken on a life of its own as a cult gem, and feels a lot like an extended episode of “Tales from the Crypt” or an EC Comic. 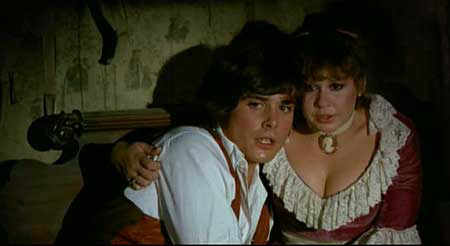 I can easily picture the classic poster for the film rendered in to a Vault of Horror comic book cover. Though “Hell Night” is admittedly cheap looking, it also packs in a ton of dread and eeriness to it, taking the premise which is mostly a one setting premise, and places a group of hapless college students smack dab at the door step of a brutally creepy mansion in the middle of nowhere. Presenting a hint of self-awareness and some fun creeps here and there, “Hell Night” is set on Hell Night, the last night before classes begin, where a group of freshmen are hazed by their classmates.

After a raucous party in town square, they’re led to Garth Manor by the frat Alpha Sigma Rho, and are challenged to spend the night at the mansion. Garth Manor has a long history involving its wealthy owners, inbreeding, and a patriarch who murdered his wife and deformed children in front of his son Andrew, and then murdered himself. Andrew, as legend explains, is said to roam the grounds haunting it. Blair, as Marti, agree to stay overnight with her small group of friends and are unaware that classmates are running around in the dark playing pranks on them and are hell bent on terrifying them.

Of course, things go awry when we learn that the deformed mongoloid Andrew is actually living in the mansion and begins slowly mutilating any and all of the college students he comes across. What makes “Hell Night” such an eerie out of the box horror film is the way Chuck Russell films the mansion, making it feel like the scene of some really bad fever dream. It also doesn’t help that Andrew knows the house better than anyone, so he always threatens to pop out of a hidden doorway, small crevice or hole, dragging down the students and making their bodies in to decorations for the grounds.

One really unnerving scene finds Marti and friend Jeff having to take a very long and terrifying walk back in to the mansion in hopes of waiting out Andrew. Despite being barricaded in a room, Andrew emerges from the floor draped in a rug, silently stalking them as they linger oblivious to his impending attack. Director Russell transforms the mansion in to a character all its own, making it a series of really dangerous obstacles including a hedge maze and a long row fences with sharp spikes that can impale anyone reckless enough to try and climb it. Andrew himself is a merciless and relentless horror movie monster who rampages through his victims without a second thought.

There are a ton of vicious deaths, and the battle for survival between Marti and Andrew is amped up in tension the more the body count rises. Blair is very well fitted in the role, giving some great screams and shrieks. She brings a lot of vulnerability and innocence to the character, and we root for her as she is stuck within the walls of the mansion and has to figure out how to get back in to town before Andrew figures out a way to trap and kill her. “Hell Night” is a movie that doesn’t fall in to the trappings of the slasher craze of the eighties, pairing the gorgeous Linda Blair against a very creepy horror villain who mangles his victims more than gashes them with a machete or an axe.

I appreciate how director Tom DeSimone doesn’t really play too many games with his audience. While he is a fan of jump scares and frights here and there, he also holds true with a very straight forward narrative, and an actual resolution. The End is the end. Or is it? Yes. It is.

I hope a great movie company like Shout! or Arrow bring us a wonderful Special Edition soon, since “Hell Night” is overdue for a Deluxe Edition that can expose new audiences to what is a bonafide creepy and spooky horror survival tale. It’s short, simple, and remarkably eerie, with a Gothic horror tone that fits just right. 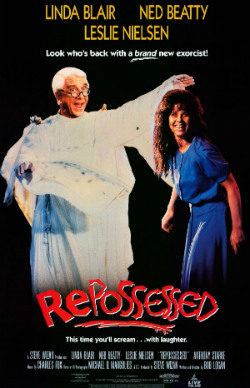 I guess if you’re going to try to spoof a hit horror movie, you might as well bring with you the star of said film. For better and for worse, Linda Blair is now and will always be associated with her star making turn as Regan in “The Exorcist.” Sadly, she’s more known for the movie, than being a strong actress who gave a strong and compelling performance. Blair uses the chance starring in “Repossessed” to burn the whole motherfucking kit and caboodle to the ground hamming it up big time in a role that’s basically Regan 2.0 if Regan became a doting housewife revisited by Pazuzu. This time, though, she’s named Nancy. Get it? Nancy Regan?

END_OF_DOCUMENT_TOKEN_TO_BE_REPLACED

In 1977, James Earl Jones co-starred in what is arguably one of the greatest movies ever made, and what is arguably one of the worst movies ever made. “Exorcist II: The Heretic” is a fine example of what could have happened if the original “The Exorcist” ended as an ill-conceived pseudo-spiritual mess. A bad idea from beginning to end, it’s one of the iconic bad sequels that is famously recollected by its producers as the movie that literally got them chased out of a theater by angry movie goers. Four years after being victimized by a demon, Regan MacNeil has somehow managed to put her life back together and live some semblance of normality. Sadly after the demonic possession, everyone’s life was just about ruined, and Regan’s life remained basically the same, as her mother Chris is frequently out of town. Does a girl have to get possessed again to get your attention, Chris?

END_OF_DOCUMENT_TOKEN_TO_BE_REPLACED 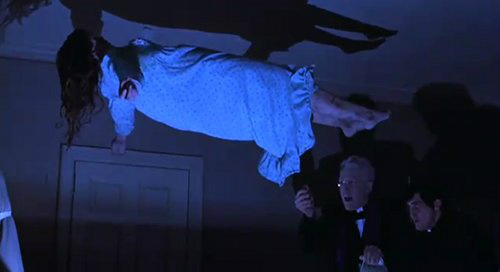 William Friedkin’s treatment of William Peter Blatty’s groundbreaking novel thankfully translated in to a groundbreaking horror film that continues to be the standard for the dismal “possession” movie sub-genre. Friedkin’s take on Blatty’s novel is a masterstroke of horror and dramatic cinema, and is easily one of the most intelligent horror films ever made. Ellen Burstyn plays Chris MacNeil a woman still reeling from a bitter divorce who is tasked with a heavy work schedule filming a movie and attending to her young daughter Regan. Linda Blair is brilliant as Regan, a young girl longing for attention, especially from her estranged father, and begins to make contact with an imaginary friend through a Ouija board she called “Captain Howdy.”