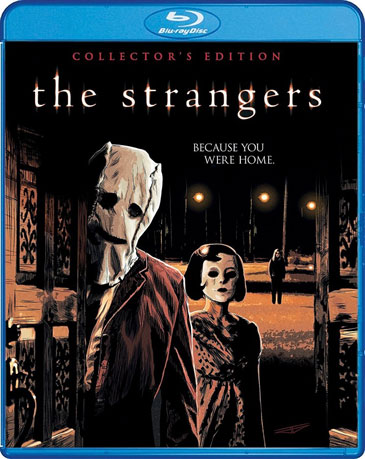 Director Bryan Bertino’s horror debut is a masterful thriller about the presence of pure evil and the relentlessness of it. Some of the best horror villains of all time are those without much conscience or logic, and the trio of killers that stalk a hapless pair of married people in “The Strangers” are almost horror incarnate. While “The Strangers” is based on the whole Manson Family murders, truthfully it pits its focus on how purely evil humanity can be. Even when obscured by masks, the trio of stalkers prominently featured is human down to the core, acting without much rhyme or reason.

Scott Speedman and Liv Tyler play James and Kristen, a young couple who return home after a wedding attempting to reconcile after a nasty fight. When a young woman appears at their door asking for “Tamara,” they think nothing of it. Soon they realize that they’re being terrorized by three masked lunatics, all of whom are cunning, swift, and relentlessly stalking them. Bertino puts his pair of characters through a true test of survival, as their relationship is already going through some trials and tribulations when we meet them.

“The Strangers” excels as a slow boil thriller that allows us to understand our killers before they go in for their prey. Bertino is excellent at playing with shadows and natural light, depicting the film’s predators as resourceful and calculating. Quite often they’re painted in a supernatural light in the vein of Michael Myers and they implement the element of terror and paranoia as a weapon well. Tyler and Speedman’s performances are bare bones, but still top notch, especially when playing off of one another. “The Strangers” is a stellar horror film and exercise in fear. Director and Writer Bertino seeks to break down a lot of walls and tropes of the genre, eliminating our security at all corners, and reminding us that sometimes evil strikes because it can.

The Collector’s Edition from Scream comes with reversible cover art with the alternate poster design. The first disc ports over the bonus material from the film’s previous release. The first disc features the Theatrical Cut, as well as the nine minute “The Element of Terror,” the nine minute “Strangers at the Door,” five minutes of deleted scenes, two minutes of TV Spots, and the original Theatrical Trailer. Disc Two features the unrated cut, and features including “Defining Moments,” a thirty minute interview with writer and director Bryan Bertino, who explores his inspirations, and a detailed look at the production.

“All the Right Moves” is an eleven minute interview with actor Kip Weeks, who explains his character was inspired by a gorilla he saw at the zoo. He also explains how he feels Dollface is the leader of the trio of killers. “Brains and Brawn” is a thirteen minute interview with Laura Margolis who plays “Pin Up Girl” and discusses auditioning for the role, the demands of the role, scaring Liv Tyler, and her consideration of the movie as “Kind of a Classic.” “Deep Cuts” is a twenty minute interview with Kevin Greuer the editor of “The Strangers.” He mentions how the film is his first slow burn horror film, and how he took the movie after finishing “Saw III,” thinking it was the last of the “Saw” films. Finally there’s a Still Gallery.